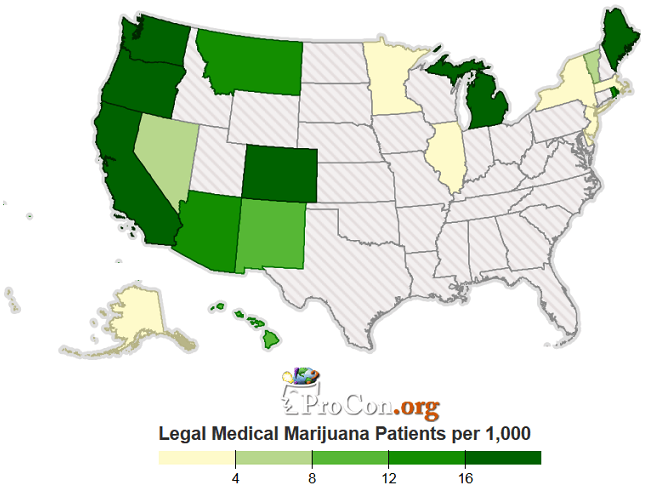 The chart below shows the official number of medical marijuana patients holding identification cards in the states (and District of Columbia) with mandatory registration. For states with voluntary (CA, ME) or no registration (WA), the patient number is an estimate from the Marijuana Policy Project based on nearby states with mandatory registration. We listed two states (MD, NH) that have legalized medical marijuana but for which no patient numbers are available yet. Those states were not included in our calculations to determine the total and average number of medical marijuana users.

We recognize the possibility that not all medical marijuana users register for identification cards and that not all of the people registered have valid medical uses for the marijuana.

State population numbers are estimates from the US Census Bureau’s 2015 data. We looked at state medical marijuana program websites and called and emailed state officials to update the medical marijuana patient numbers in Mar. 2016. See all sources below. Reference our Oct. 2014 estimates to see how the numbers have changed.

How Many Legal Medical Marijuana Patients Are There in the United States?

Notes:
1. California has registered 84,111 card holders since the program began, but cards are only valid for one year; 6,490 cards were issued FY2014-2015. California’s registry is voluntary, so the number of cardholders likely underestimates the number of users. For this resource we have used the Marijuana Policy Project (MPP) Feb. 8, 2016 estimate for the number of California patients, which is based on Oregon’s patients per capita. Maine also has voluntary registration (1,480 registered card holders), so we used the Aug. 31, 2015 estimate from MPP, which is based on Michigan’s patient numbers.

2. The Illinois Department of Public Health began issuing registry identification cards in Oct. 2015 and the first dispensary opened in Nov. 2015.

3. Maryland is still developing its medical marijuana program and “anticipates that medical cannabis may first be available to patients in the second half of 2016,” according to the FAQ section of the program’s website. New Hampshire began issuing cards on Dec. 28, 2015 and the dispensaries are not scheduled to open until spring 2016, so the number of patients is not yet available.

4. Washington state never created a registration program, but a law passed in Apr. 2015 created a Medical Marijuana Authorization Database that will entitle medical marijuana patients to additional rights (arrest protection, tax-free purchase, and three times the recreational purchase limit) starting July 1, 2016. Recreational marijuana is legal in Washington, which makes it harder to estimate the number of medical users. We have used the Marijuana Policy Project (MPP) Feb. 8, 2016 estimate for the number of Washington patients, which is based on Oregon’s patients per capita.

6. Jeff Dang, PhD, Director of Statistics and Quality Analysis at FAIR Health Inc., commented on our methodology in a Mar. 10, 2009 email to ProCon.org. Although Mr. Dang’s statement is based on our 2009 patient estimate of 577,712, the method we used in 2016 to estimate patients is the same.

“ProCon.org should be congratulated for providing an estimate of the number of people who hold identification cards for medical marijuana in several states throughout the country. Furthermore, ProCon.org has provided an estimate that currently serves as a general reference point for enumerating the total number of medical marijuana patients in the country. ProCon.org has conscientiously disclosed many of the problems associated with their estimates and provided the algorithms that were used to derive the estimates (see [above] footnotes). However, two notable limitations should be added and have been delineated below.

First, the current estimate of 577,712 included data from a variety of sources (e.g. estimates from the Marijuana Policy Project and data from the Census Bureau). In several states, different data collection and estimation methods were employed. It is important to note that each approach contributes additional sources of bias and error that have not been teased apart or accounted for in the current estimate. More generally, the quality of the data have not been verified or described in detail. Secondly, it is clear that systematic probability sampling techniques were not employed therefore these numbers cannot be generalized to the rest of the nation. In other words, these particular states are not representative of all states in the US and the sample data are not representative of US population.

To derive more accurate estimates, rigorous research methods should be employed. In particular, random sampling remains the gold standard for estimating prevalence. The reality, however, is that research is often conducted on a shoestring budget and practical concerns often prevent the kind of research that is actually desired.”